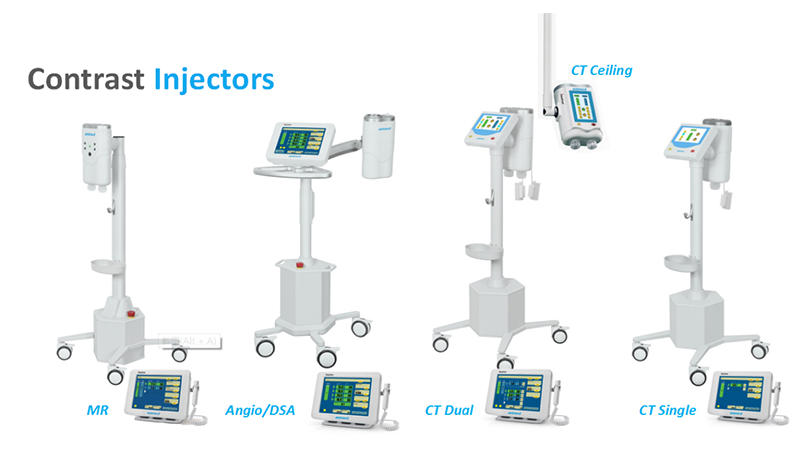 As the leader manufacturer in China and professional provider for Medical Imaging Industry, Antmed is also the first class supplier for the accessories of Contrast Media Injectors. We are the biggest manufacturer for High Pressure Syringes, Pressure Connecting Tubes and other products in China.

The previous manual hand-push CT scanning cannot accurately control the injection speed of the contrast media, the injection volume is uneven, and a large injection force is required, and there are many influencing factors. Scanning is performed after the routine injection of drugs, which often results in the development of arterial phase has passed, the enhancement effect is not good, and the diagnostic requirements for various lesions cannot be met. Using a CT Contrast Media Injector in CT scanning is easy to operate, saves time and effort, and reduces the amount of contrast media; at the same time, the flow rate, flow rate and pressure can be set at one time according to the examination site, and two speeds can be used for scanning successively to maintain the contrast media concentration in the blood. In particular, it can better cooperate with multi-slice spiral CT scanning and CT angiography to display more characteristics of arteries and lesions, and provide reliable imaging basis for definite diagnosis. Moreover, the Contrast Media Injector is also equipped with an automatic heating device, which can reduce the occurrence of side reactions of the contrast media. However, due to the fast flow rate of the Contrast Media Injector liquid and the large flow rate in a short period of time, special attention should be paid to patients with severe hypertension, heart disease, and kidney disease, and the pressure and flow rate should be appropriately reduced; Toxic and side effects and contrast media spillage occurred in very few patients. In any case, the wide application of Contrast Media Injectors will certainly provide the necessary means for the advancement of CT scanning technology and imaging diagnostic methods.

For more information about our products and services, please contact us at info@antmed.com